Outernet have chosen WHATS’ON — the M&E Business Management Platform by MEDIAGENIX — to manage all their channels across multiple locations within their London entertainment district based in Soho.

Outernet London is an immersive media and entertainment business boasting the world’s largest high-resolution immersive wrap-around screens and audio, a new 2,200 capacity live events venue, the unique Denmark Street apartments and session rooms of Chateau Denmark, alongside restaurants and bars, all situated right in the heart of Central London. The Now Building has the largest deployment of video screens in the world boasting four-storey 36-degree 16K screens with 4D and interactive capabilities.

Mike Whittaker, CTO of Outernet: “When we were putting together our plans to display our unique content in the heart of London we needed to partner with vendors who not only had a proven track record but who could adapt quickly to the new and distinctive challenges Outernet presented. After a short analysis phase where we brought the team to Brussels we decided that MEDIAGENIX and their scheduling system, WHATS’ON, were the perfect fit for that brief.”

“We needed to partner with vendors who could adapt quickly to the new and distinctive challenges.”

This was an unusual challenge for MEDIAGENIX. Tom Donoghue, MEDIAGENIX Business Development Manager: “After a short and intensive analysis period in February 2020 we launched our project and ran head-first into Covid and lockdown. As Outernet were still building their premises in Denmark Street and nobody could get on site it meant a reassessment of the plans.”

The project team had to liaise with vendors in London, Germany, and on the West Coast of the USA to deliver a never before set of requirements and integrations . Some of the technology was custom made to provide the content schedule and management for Outernet’s real-time immersive and interactive content at 16k resolution. This also presented the team with new hurdles to jump before getting to a point where they were ready to go live. Despite all the teams working remotely there has been great cooperation from all parties.

Outernet have plans for further locations in Los Angeles and New York and beyond. The Outernet deal adds another important name to the list of 2021 wins for MEDIAGENIX. Outernet London will join the fast-growing community of WHATS’ON users, which already boasts London-based names such as A+E Networks UK, BBC, DAZN, and UKTV, and many other prominent media companies and groups, such as Al Jazeera, BeIN Sports, MBC, and ViacomCBS Networks International.

Tom Donoghue: « MEDIAGENIX welcome Outernet London  as a valued partner with great pride. Together our teams will meet this new challenge with the greatest enthusiasm and dedication. »

Outernet is a global network of immersive media and culture districts designed to provide experiences for entertainment, brand activation and retail the likes of which have never been seen before. The first will open in central London in Winter 2021 and will kick off a global roll out with sites planned in New York, LA and Europe.

Outernet will feature the world’s first of its kind public atrium – The Now Building – containing an immense digital canvas: a 4-storey high, floor to ceiling, 360 degree, 16k screen surface – the most advanced of its kind on the planet. A daily footfall of 400,000 people set to experience this new London landmark.

Music is at the heart of Outernet London. The Denmark Street location is often described as the birthplace of the British music industry and is where artists from David Bowie to The Sex Pistols hung out, made music and lived. A 2,000 capacity venue, the largest in central London since the 40’s, the reborn and iconic 12 Bar Club and a further intimate live venue are all set to open.

Make an appointment for a remote meeting or demo

Sign me up for the MEDIAGENIX newsletter and give me regular updates about challenges and solutions for our media operations. 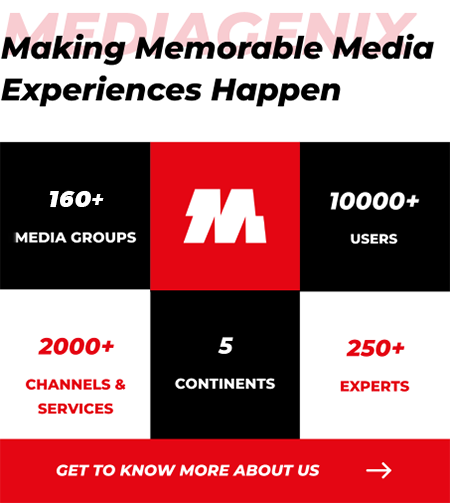